Tunnel is a two-voiced arpeggiator and a generator of melodic and harmonic textures. It is easy to operate because when you press a key on the MIDI keyboard, a ready-made pattern is played, which can be easily edited and is just as easy changed in real time using MIDI controllers. Also, the keyboard can be tuned to any of 12 major or minor tonalities and this allows you to play the chord progression with just one finger.

Tunnel has two sound oscillators For each of them separately adjustable ADSHR volume envelope, waveform selection, pitch tuning and type of played arpeggio. The signals of both oscillators affect each other. They can mutually modulate each other in amplitude (AM synthesis) and the first oscillator can modulate the phase of the second oscillator (PM synthesis). There is also a noise generator, which can be mixed with a signal of any oscillator and an onboard delay effect synchronized with the tempo. 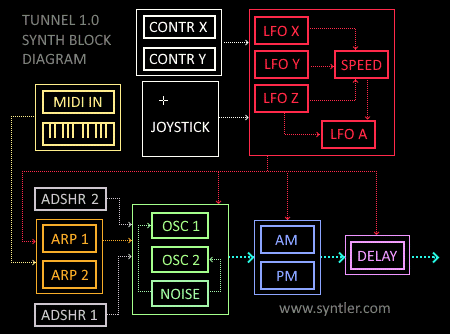 Modulators are control signals that dynamically change the synthesis parameters. There are 5 in total. 4 of them are low frequency oscillators (LFO), adjustable in amplitude, frequency (speed) and waveform type. The work of the three LFOs is visualized by a 3D indicator, in the form of a flying ball. The fifth LF signal is a graph of the speed of this ball. Modulators affect the following parameters:

Arpeggio is played depending on one of 5 modulators and internal sequencer. Schematically it can be depicted as follows: 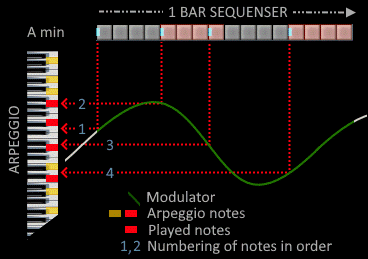 Since Tunnel sets up the keyboard to play in one of 12 minor or major keys, you must first select the tonality you want. To do this, use MIDI notes from 72 to 83. The choice of minor or major depends on the velocity. Velocity 0-76 is minor, 77-127 is major. You must record MIDI note 72 to 83 into the DAW sequencer. In this case, the Tunnel will always be tuned to the correct tonality when the song is played back. Playing note 72-83 once will switch the Tunnel to the selected tonality and this setting will not change even if you switch presets. Selecting a key using the menu on the front panel (you need to select a tonality and press the SET button) is auxiliary and serves for comfortable listening and selecting presets.

The EDIT button allows you to change the chords used in the selected tonality. There are 4 types of chords that can be used: minor, major, dim and sus. This is usually unnecessary, unless you are a great jazzman).

Note that only C minor and C major will be displayed when editing. But all changes will affect the entire tonal range.

The tunnel has two modes of operation. MIDI and Internal. MIDI is priority mode. Internal mode, when the GUI keyboard is used, is auxiliary and serves for editing and selecting presets. Switching modes occurs when you press a key on the MIDI keyboard or on the keyboard of the graphical interface. When switching to MIDI mode, the yellow indicator will flash.

LOOP button enables continuous playback. This works in both MIDI and Internal modes. Press the current key again to stop loop playback. This is an auxiliaries feature that is useful when selecting and editing presets. Loop function is disabled when recording to the sequencer and playing back from the sequencer.

Tunnel does not support Programm Change messages. But it can change presets with MIDI Controller 0 (Bank Select). At the same time should be open GUI plugin interface. It may be invisible. For example, it is overlaid by other windows or dragged almost beyond the screen.If you close the window of the plugin, the commands of Controller 0 will not work. Also controller 0 changes the first 128 presets from the folder, sorted by name. Therefore, the order may change when the presets are renamed. It is recommended to save the presets with the DAW browser with the numbers from 0 to 127, rewriting the old settings. You can also change preset names. Just don't remove the digital prefix at the beginning. For example: "032 Mypresetname", "114 Onemorepreset" etc.

Limitations in the demo version:

In MIDI mode, you can only use one octave (in the full version, three octaves) and cannot record joystick automation.

Zip archive contains two folders. Unpack the archive. Put the folder TUNNEL (TUNNEL.component for MAC) in your current plugin directory. Put the TUNNEL folder from the PRESET folder into your current presets directory.